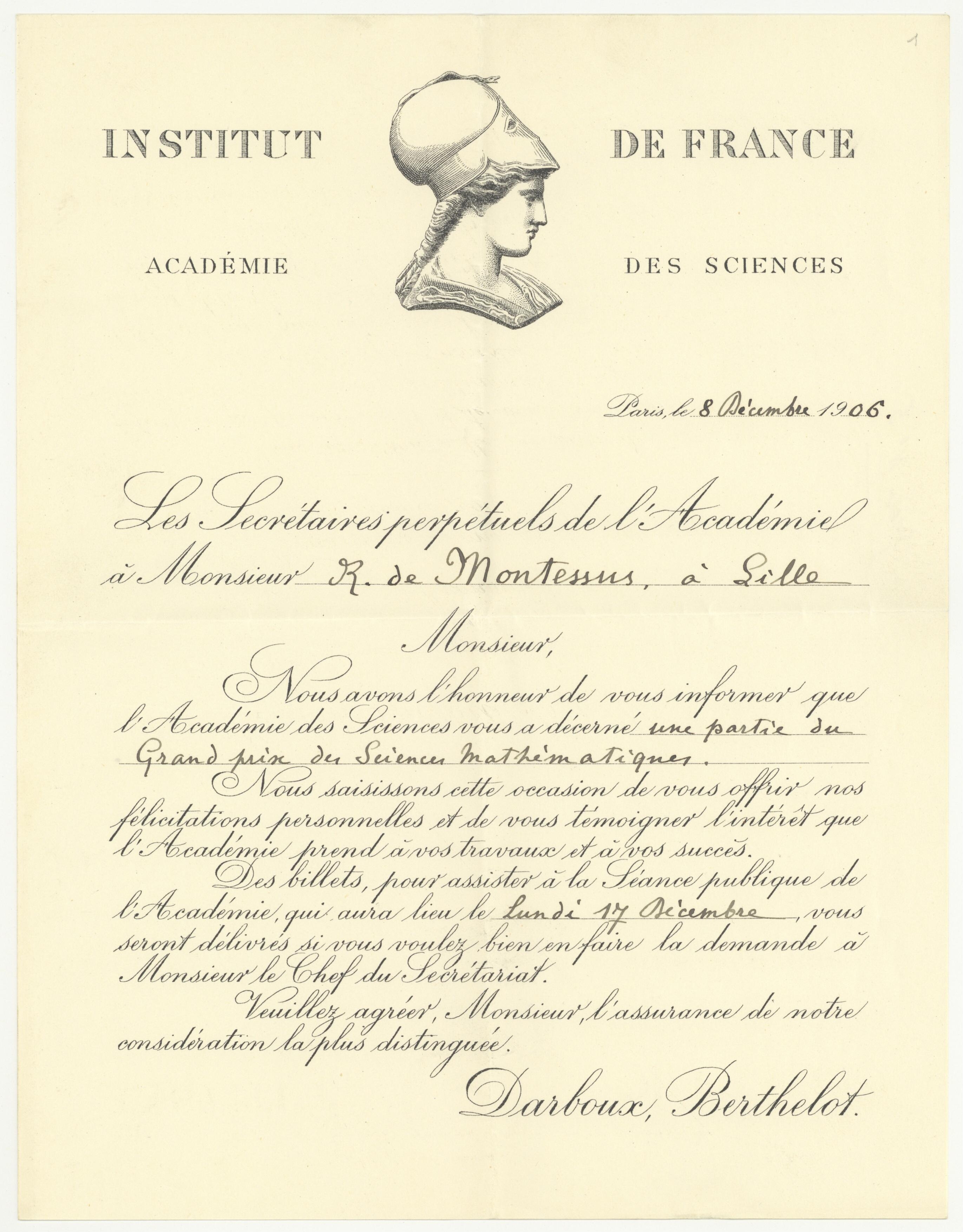 The documents in this corpus were collected in July 2010 by Mr Hervé Le Ferrand from the eldest daughter of Jacques de Montessus, son of Robert de Montessus. Mr Louis Lecointre, son of Simone, the children of Jacques and Mrs Claude de Montessus, wife of the youngest son André, the beneficiaries, donated the documents to Sorbonne University  in 2011.

All documents relating to the scientific work of Robert de Montessus can be consulted at the Mathematics and Computer Science Research Library (Jussieu site), after prior appointment with the library manager. By contrast, documents concerning his private life, in particular family correspondence, will remain incommunicable until January 2041, except to his family.

Born on 20 May 1870 in Villeurbanne, near Lyon, Robert Montessus de Ballore belongs to a very old family of Burgundian nobility: through his mother, he is a descendant of the naturalist Philibert de Commerson. His older brother, Fernand de Montessus (1851-1923), a polytechnician and fellow student of Marshal Foch, is considered one of the founders of modern seismology. In 1907, he created and directed an earthquake observatory in Chile at the request of the Chilean government. Robert de Montessus, after enlisting in the French army, then a position in the railway, became a teacher in various religious institutions. At the same time, he took mathematics courses at the Sorbonne. He obtained a degree in Mathematics in 1901 and began a thesis, encouraged by Paul Appell. In 1903, thanks to his friend the mathematician Robert d'Adhémar, Robert de Montessus joined the Catholic University of Lille, which he left for good in the early 1920s to take up a position as a researcher and teacher at the Office National de Météorologie in Paris. Robert de Montessus defended his thesis in 1905. This thesis was awarded a Grand Prise by the Academy of Mathematical Sciences in 1906. During the First World War, he gave several free lectures at the Sorbonne and carried out ballistic calculations for the Ministry of Armament. He joined the editorial board of the Journal de Mathématiques Pures et Appliquées in 1917, then directed by Camille Jordan. In 1919, he created the Index Generalis, a directory of higher education institutions and research laboratories around the world. Until his death in January 1937, Robert de Montessus continued to write and publish extensively.